The consolidated financial statements for 2018 were drawn up by the directors of NH Hotel Group, S.A. at the Board meeting held on 25 February 2019, in accordance with the regulatory reporting framework applicable to the Group, as established in the Code of Commerce and all other Spanish corporate law, and in the International Financial Reporting Standards (“IFRS”) adopted by the European Union in accordance with Regulation (EC) No. 1606/2002 of the European Parliament and in Law 62/2003, of 30 December, the Tax, Administrative, Labour and Social Security Measures Act as well as in the applicable standards and circulars of the National Securities Market Commission and the remaining Spanish accounting standards which may be applicable, and as such give a true and fair presentation the Group’s equity and financial position at 31 December 2018 and of the results of its operations, changes in equity and consolidated cash flows for the year then ended.

Since the accounting standards and valuation criteria applied in the preparation of the Group’s consolidated financial statements for 2018 may differ from those used by some of its component companies, the necessary adjustments and reclassifications have been made to standardise them and adapt them to the IFRS adopted by the European Union.

2.1.1 Standards and Interpretations Effective in this Period

In 2018 new accounting standards came into force and were therefore taken into account when preparing the accompanying consolidated financial statements, but which did not give rise to a change in the Group’s accounting policies:

A) New obligatory regulations, amendments and interpretations for the year commencing 01 January 2018. 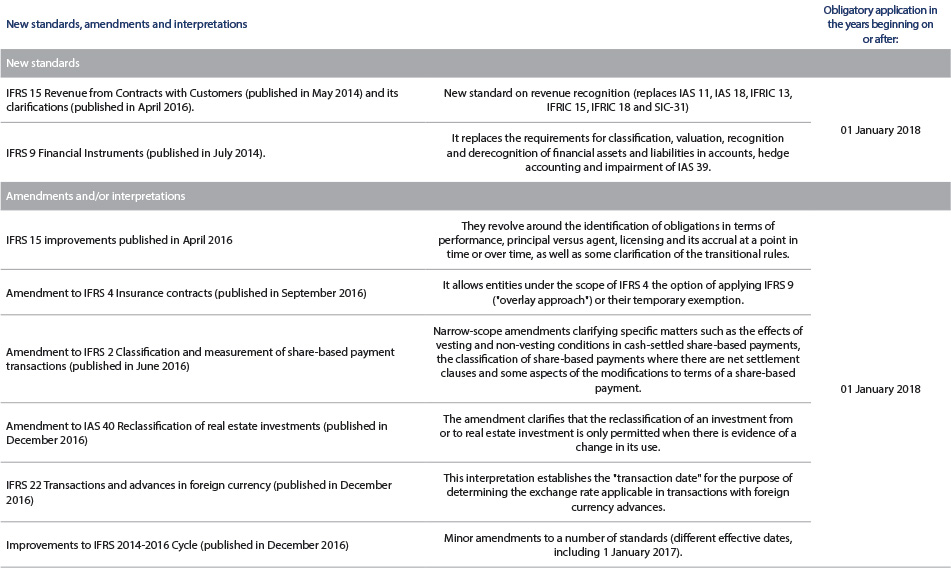 These regulations and amendments have been applied to these consolidated financial statements without significant impacts on either the reported figures or the presentation and breakdown of the information, either because they do not entail relevant changes or because they refer to economic facts that do not affect the Group.

Specifically, on 1 January 2018, IFRS 15 came into force, which is the new comprehensive standard for recognition of income with customers, and replaces standards and interpretations currently in force: IAS 18 on Revenue from ordinary activities, IAS 11 on Construction Contracts, IFRIC 13 on customer loyalty programmes, IFRIC 15 on agreements for the construction of real estate, IFRIC 18 on Transfers of assets from customers and SIC 31 on Revenue/Barter transactions involving advertising services.

The new revenue model applies to all contracts with customers except those falling within the scope of other IFRS, such as leases, insurance contracts and financial instruments.

The central recognition model is structured around the following five steps.

Due to the Group’s activity, as well as the relationships with its customers, the Parent Company’s Directors consider that no significant changes derive from its application in relation to the current record of the Group’s operations.

B) New regulations, amendments and interpretations which will be obligatory in the years following the year commencing 01 January 2019 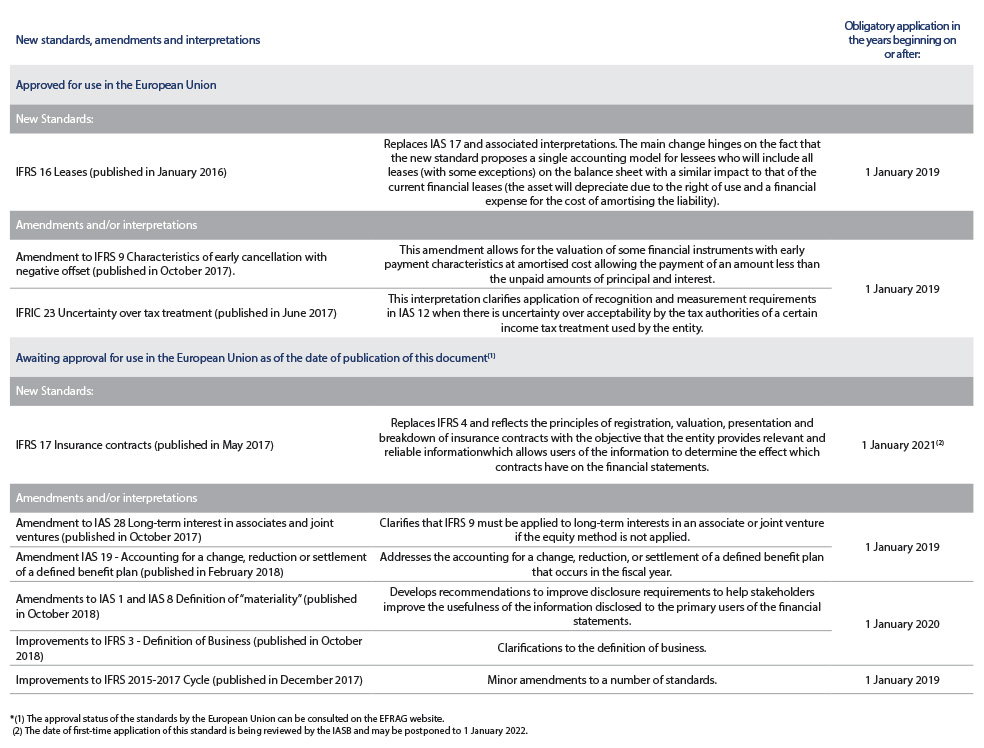 IFRS 16 will replace IAS 17, IFRIC 4, SIC-15 and SIC-17 IFRS 16 and establishes the principles for the recognition, measurement, presentation and disaggregation of leases and requires lessees to account for all leases under a balance sheet recognition model similar to the accounting for finance leases under IAS 17. IFRS 16 came into force on 1 January 2019 and the Group decided not to apply it early.

The lessor’s accounting under IFRS 16 is substantially the same as under IAS 17. The lessor shall continue to classify leases using the same criteria as under IAS 17 and distinguish between operating and finance leases.

The Group shall apply the standard to all contracts that were identified as leases in accordance with IAS 17 and IFRIC 4, except for the exceptions recognised by the standard. These exceptions are as follows: leases of low-value assets (e.g. computers) and short-term leases (leases for periods of less than 12 months). Also, the Group analysed the subleases signed at the transition date and, due to their amount and the applicable market conditions, were not considered relevant for the application of the standard.

The Group decided to apply the modified retrospective method as the transition method to IFRS 16, calculating the asset at the commencement date of each identified contract and the liability at the transition date, using for the calculation of both the incremental interest rate at the transition date and recognising the difference between the two items as an adjustment to the opening balance of the consolidated reserves.

In order to determine the term of the lease contracts, the Group has taken as non-cancellable the initial term of each contract, taking the possible unilateral extensions at the option of the Group only in those cases in which it has been reasonably considered certain that they will be exercised, and only the cancellation options whose exercise has been reasonably considered certain have been taken into account.

The incremental interest rate is the interest rate that the lessee would incur at the commencement of the lease if it borrowed, over a period of time, with similar guarantees and in a similar economic environment. The interest was calculated as a combination of the following elements:

These elements were combined to obtain an interest rate curve for each contract based on its geoeconomic specificities and from which, the calculation process consists of bringing each of the discounted flows to the present value at the interest rate corresponding to each maturity within said curve and calculating which single equivalent rate would be used to discount said flows.

The impact of IFRS 16 on the Group’s financial statements is significant due to the maturity of the contract portfolio.

Aforesaid estimated impact at 1 January 2019 will result in an increase in assets for usage rights of approximately 1.7 billion euros, an increase in liabilities for operating leases of approximately 2.1 billion euros and a decrease in reserves of 0.4 billion euros. The Group is finalising the analysis of the first impacts of IFRS 16, and it is not estimated that the finalisation of the same will result in an absolute difference of more than 10% with respect to the aforementioned indicated impacts.

The calculation of these impacts has been performed as if IFRS 16 had been applied from the inception of each contract or from the date of initial consolidation of the lessee of the contract. The calculation was made by discounting the lease flows by recalculating the asset and liability for each material modification to the lease and using an incremental interest rate calculated for each of the contracts at the transition date without taking into account the tax effect.

The Group estimates that the net profit before tax will decrease by approximately 5 million euros, taking into account the portfolio at the transition date, without considering additions, deletions or amendments to contracts that might occur after that date.