The breakdown and movements under this heading during 2018 and 2017 were as follows (in thousand euros): 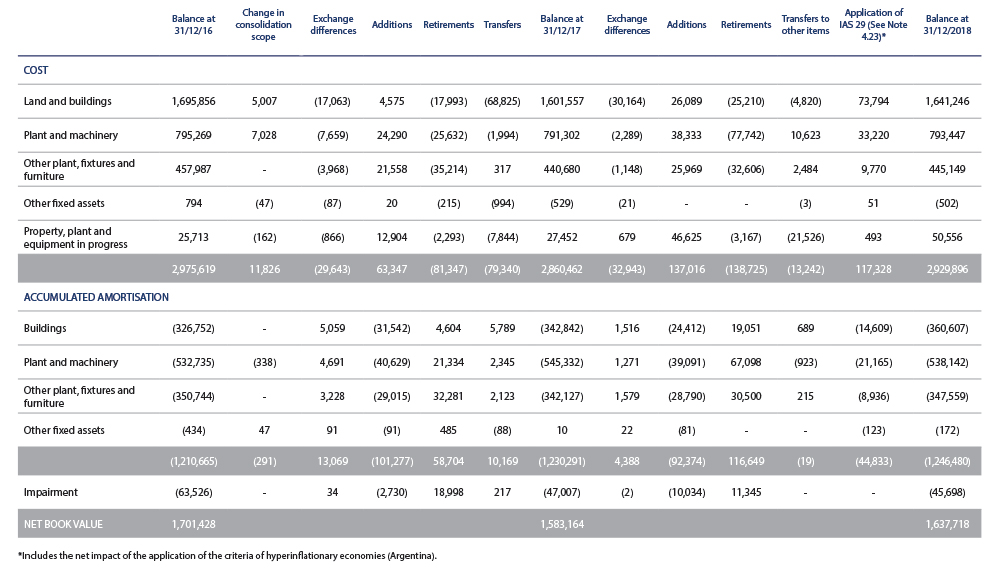 In 2017, the net additions for the year in the column “Changes in the scope of consolidation” come from the purchase of the companies WILAN ANDER, S.L. and WILAN HUEL, S.L. (see Note 2.5.4) and the exit of the company Hesperia Enterprises de Venezuela, S.A.

The column “Application of IAS 29” includes the cumulative impact of the restatement of property, plant and equipment from the date of first application of IFRS or the date of last revaluation, with the changes in 2018 being as follows:

Transfers to other items relate mainly to the second building of the NH Malaga classified as a non-current asset held for sale in 2018 amounting to 12,562 thousand euros (see Note 11).

The breakdown of impairment by country is as follows (in thousand euros):

In 2018, impairment amounting to 10,034 thousand euros has been recognised for certain assets due to the worsening of future expectations of cash flows for different reasons, including the opening of competitors’ hotels or the loss of an important customer (2,730 thousand euros in 2017), and 11,345 thousand euros registered under “Net Profits/(Losses) from asset impairment” of the 2018 consolidated comprehensive profit and loss statement have been reversed.

During the year, various tangible and intangible assets were de-recognised, replaced or disposed of to third parties outside the Group, the net effect being a loss of 1,333 thousand euros, recognised under “Gain/(loss) on the disposal of non-current assets” in the 2018 consolidated comprehensive profit and loss statement. In addition, “Gain/(loss) on the disposal of non-current assets” includes the gain recognised on the sale of the NH Collection Barbizon Palace classified as available for sale in 2018 (see Note 11).

At 31 December 2018, firm purchase undertakings amounted to 66.7 million euros. These investments will be made between 2019 and 2020 (51.5 million euros in 2017).
The recoverable amount of the CGUs subject to impairment or reversal (not the entire portfolio of the Group) is as follows: