This Non-Financial Information Statement Report, which forms part of the Directors’ Report of NH Hotel Group, refers to the year 2018. With this Report, NH Hotel Group responds to the requirements of Act 11/2018 on non-financial information and diversity.

The companies included in the non-financial reporting perimeter are the same as those following the Company’s financial reporting consolidation principles, i.e. hotels owned or under lease in operation at 31 December 2018. This represents a total of 304 hotels, 46,267 rooms and 10,956 employees.

To draw up the Non-Financial Information Statement, the requisites established by the above-mentioned Act have been followed, as well as the Standards of the Global Reporting Initiative (GRI). For a better understanding, APPENDIX 1 of this document may be consulted, which contains a table setting out the legal requirements and GRI standards.

In accordance with ruling mercantile legislation, this Non-Financial Information Statement has been examined by KPMG Asesores, S.L. The independent Auditors’ Report is attached on page 179.

This Non-Financial Information Statement does not replace the Corporate Social Responsibility Report 2018 of NH Hotel Group, which will be published in full in 2019, expanding and elaborating on the contents described here.

The analysis of relevant matters for the business and stakeholders or materiality analysis is key in the Corporate Responsibility management process, both for reporting purposes and in defining strategy, initiatives and stakeholder relations.

This process has been carried out in different phases, following GRI recommendations for identification, prioritization and validation.

The results of the analysis are presented in the Materiality Matrix 2017 according to the areas of relevance for NH Hotel Group’s activity and for its stakeholders. It shows which aspects covered by law such as pollution, biodiversity or health and safety, are not material for the Company. 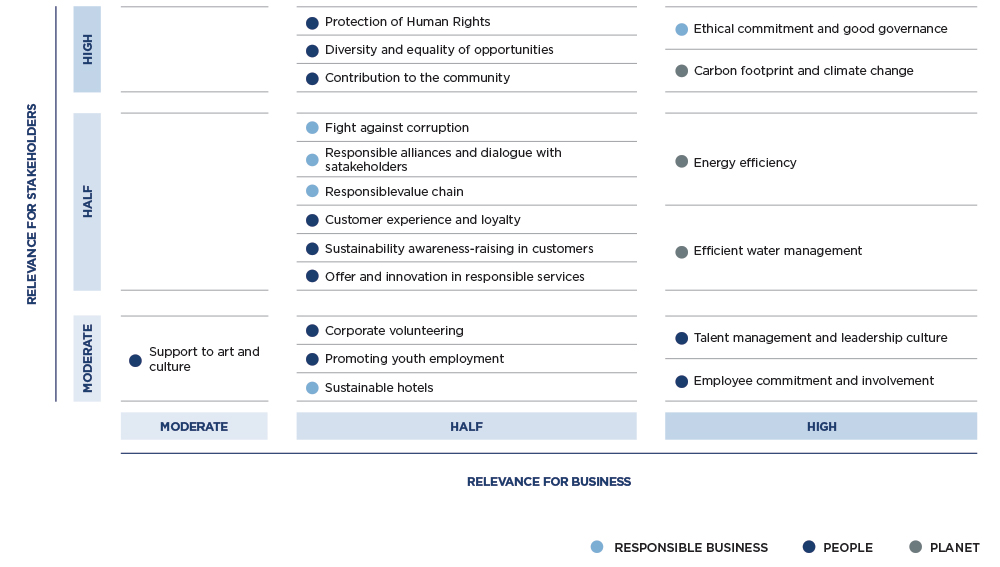