Business environment and organization of the group

The centralized business model allows NH Hotel Group to offer an excellent service to its customers in the different hotels in the various geographical regions and areas where it operates. The corporate head office and regional offices offer the hotels a wide range of functions such as sales, reservations, marketing, human resources, financial management and systems development.

On 30 November 2018, the effective termination of all the management contracts with Grupo Inversor Hesperia S.A. was formalized, due to the takeover of NH Hotel Group by the investor Minor International.

At the end of the period of acceptance of the Public Takeover Bid on 22 October 2018, Minor International acquired 369.2 million shares in NH Hotel Group representing 94.1% of the share capital. Minor International has started to work together with NH Hotel Group on defining a new strategic plan up to 2023, identifying synergies and with the aim of maximizing shareholder value.

The registered office of NH Hotel Group, S.A. is established in Madrid. 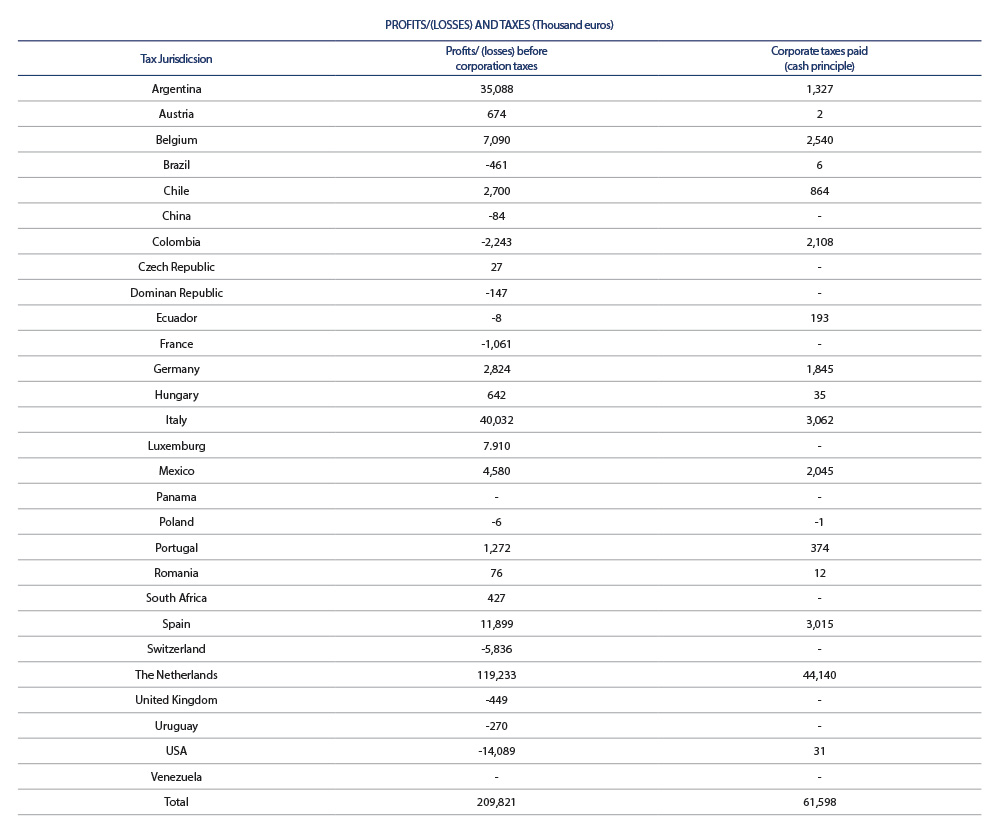 Profits or losses before taxes and taxes paid by country described above are affected, in some cases, by circumstances such as the sale of assets, departure of hotels, early depreciation of assets due to repositioning or the situation of hyperinflation in the case of Argentina. Furthermore, it should be noted that the Corporation Tax shown in the above table is based on the cash principle.

In 2018 the Company received 132,088 euros in grants, 89% of which corresponded to grants for employee training.

Global growth has maintained a positive trade and investment cycle. Furthermore, the European economies continue to grow although certain signs of slowdown are starting to be seen, with more moderate growth rates.

On the other hand, growth in emerging countries is expected to continue stable, although with greater divergences between the different geographical areas. Thus, in Latin America growth of +1.0% in 2018 is expected (vs. +1.2% in 2017), affected by worsen financing conditions with Argentine suffering a depreciation of its currency and having been declared hyperinflationary economy and Mexico growing slightly less than expected.

Context of the hotel sector

According to the World Tourism Organization (“UNWTO”), in 2018 international tourist arrivals worldwide reached 1.4 billion, which represents an increase of +6% compared to the previous year, clearly above the growth of 3.7% in the world economy, thus consolidating the strong results for 2017 and proving to be the second strongest year since 2010. More specifically, international tourist arrivals in Europe reached 713 million in 2018, a notable increase of 6% compared to an exceptionally strong 2017.

The growth of tousits was driven by Southern Europe and the Mediterranean (+7%), Central and Eastern Europe (+6%) and Western Europe (+6%). In this European context, Spain has consolidated its position as the leading world tourist destination together with France and the United Kingdom, beating its own record with 82.6 million foreign tourists and noting a 1% increase in the number of international arrivals.

On the other hand the Americas (+3%) received 217 million international arrivals in 2018, with mixed results in all destinations. Growth was led by North America (+4%) and followed by South America (+3%).

In 2018 work has continued on attaining the objectives set out in the Strategic Plan 2017-2019 which establishes as priorities to drive the revenues of NH Hotel Group, increase its efficiency and reduce debt, while taking advantage of its strengths for new repositioning opportunities and organic expansion as an additional path to growth.

During the last year, the Group has placed its focus on brand development and segmentation, revenue management, quality and repositioning. The Company’s operational efficiency has also been boosted and borrowings have been significantly reduced.

NH Hotel Group has driven a greater positioning of the hotel portfolio in the superior segment, increasing its presence under the NH Collection and nhow brand.

Furthermore, the Company has advanced in its digital transformation, which is based on three pillars: getting to know customers better, increasing operational efficiency and using technology as support to maintain a process of continuous innovation in all areas of value of the Company.

Portfolio optimization has been another of the strategic lines undertaken by the Group in 2018, through initiatives aimed at intensifying the profitability level of its portfolio. Thus, growth operations with a low capital commitment have taken place as well as the selective departure of hotels from mature markets in which a lot of capital has been invested.

The sound generation of operating cash in the year and the contribution of asset rotation have made it possible to consolidate a significant cash position during the year. This, together with the early bond conversion of €250 million in June 2018, has permitted a significant reduction in the Group’s net financial debt, which at the end of 2018 reached 170.7 M€.